Canadian studio RSAAW has renovated a mid-century household in Vancouver to include things like a double-peak library, all-white interiors and a treehouse in the backyard.

The challenge, called Berkley Dwelling, is a two-storey household with a darkish facade surrounded by trees in North Vancouver.

Nearby organization RSAAW reworked the family household into a vibrant and ethereal room by connecting its beforehand divided two concentrations and painting the gallery-like interior in white.

A slanted roof functions huge skylights that emphasise the central atrium room of the open up-plan ground ground. Prior to the renovation, this amount was a home finance loan helper suite.

Berkley House’s related levels are anchored by a double-height library fashioned by stacked bins of light-weight wooden. The wooden bookcase is built into the staircase linking the concentrations jointly. 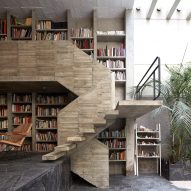 “The home’s sense of room was additional augmented by vaulting ceilings all over the main ground, ” ongoing the studio.

“Adding outsized glazing to authorized for sights of the North Vancouver greenery in the back garden and further than, filling the household with light even on overcast days.”

The reduced level’s circulation was also improved by turning a former mechanical room into a hallway with discreet storage, which contrasts with the open up living area together with it that is filled with custom made millwork and pops of colour.

Formerly inaccessible attic space has been converted into a cosy kid’s playroom, with a multicoloured carpet that is echoed in the strips of painted timber that mark the entrance to a treehouse exterior.

Created about a Douglas fir tree, the understated treehouse blends with its surroundings, injecting a playfulness to the in any other case small home.

RSAAW also replaced the home’s pressured-air central heating system with energy-successful underfloor heating and mounted triple-glazed windows all over the setting up.

Other current mid-century renovation assignments include a modernised Melbourne condominium by architect Murray Baker and artist Esther Stewart and a holiday getaway house on Fire Island in the Atlantic by American studio Andrew Franz Architect.

Images is by Ema Peter.