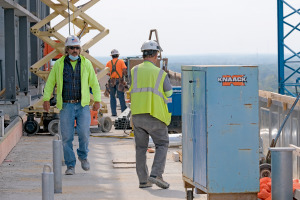 For typical consumers, inflation became a top-of-mind issue only this year, as the price of everything from gasoline to baby formula took off for the stratosphere.

But construction companies—whether they specialize in factories, warehouses, roads or houses—have been dealing with it since the onset of the pandemic brought supply chain snarls and white-hot demand.

The COVID threat has since receded, but construction costs are rising faster than ever.

A recent report from the Associated General Contractors of America states that, from April 2021 through the first quarter of 2022, the price of nonresidential construction components, or inputs, has risen 21%. Among those inputs, diesel fuel has jumped 86%; plastics, 30%; and insulation products, 19.6%.

Those insulation products served as an introduction of sorts to the pain of inflation for Kevin Hunt, president and COO of commercial contractor Shiel Sexton Co. Back in February 2021, Texas suffered a major power outage, which in turn caused a shortage in many kinds of insulation. This was quickly followed by further disruptions in national and international supply chains.

“The deep freeze had a huge impact in the spring and summer of 2021,” Hunt said. “But those were single-digit impacts. The latest inflation costs really ramped up about six months ago. We’ve really started to feel that.

“If you have a 4% price rise, that’s a blip. It’s manageable and you figure ways around it. But when you see 50% or 100% increases, which is happening to contractors right now, it’s no blip.”

Both contractors and suppliers have changed their tactics to cope with rising prices. For instance, some sellers of window panels, bricks and other supplies have stopped offering long-term price quotes, which makes budgeting for a job far more complex.

“If I ask for a price for, say, a rubber roof; they don’t guarantee that price unless you buy the product that day,” Hunt said. “Well, typically, construction materials are purchased and then installed six, 12, sometimes 24 months later. But no suppliers are holding to that pricing right now.”

Shiel Sexton is coping with this new world by being upfront with clients about budgeting for the pricing risks their projects might face. For instance, Hunt advises clients to set aside a certain amount of a structure’s budget to cover price increases for materials.

Other contingency plans include purchasing supplies when a good price becomes available, then storing them in a warehouse until they’re needed. Right now, the warehouse rent will likely be less onerous than a future price increase.

“Warehouse rent is a fixed number,” Hunt said. “It’s not a variable, like the price of materials.”

In the face of such challenges (along with rising interest rates), a few clients have either slowed down or put their projects on hold.

“We have a renovation for a dormitory at Indiana University that’s been on hold for a year,” Hunt said. “That sort of thing has happened not just to us, but to a lot of other contractors.”

BMWC’s Buckman specializes mostly in industrial projects all over the country—from food processing facilities to refineries. And he’s working through the same thicket of problems faced by his colleagues: skyrocketing prices for pretty much every construction component, persistent supply chain problems, and exorbitant fuel prices that raise costs everywhere.

As with other contractors, this has made waves for BMWC’s clientele. While clients in some industries have more or less shaken off inflationary concerns and are pushing ahead, others either haven’t or simply can’t.

“We haven’t had anyone bow out, but we have certainly experienced delayed project starts while we work with clients to figure out how to get the project done for a price that still fits in their models,” Buckman said. “Some of our heavy-industrial, oil and gas, pharmaceutical and semiconductor clients are moving forward pretty much full speed ahead. But you get outside of those markets, and some are still trying to figure out whether a project makes sense or not.”

One way BMWC tries to keep costs under control is by performing more off-site prefabrication work for big projects. In other words, instead of building a suite of rooms or a complex bit of industrial piping at the construction site, BMWC builds the structure in a warehouse under conditions that are easier to control, then trucks the section to the building site and drops it in like a puzzle piece.

“We’re expanding our local fabrication facility here in Indianapolis,” Buckman said. “And we’re looking to double that again with a new facility locally. We’re trying to bring more and more prefabrication in house.”

Although prices for concrete and asphalt (as well as labor costs) are also on the rise, the increase in costs for state and city road projects is—so far—not catastrophic.

“Across the board, we’re seeing anywhere from about a 12% to 14% increase in overall construction prices this year,” said Scott Manning, Indiana Department of Transportation deputy chief of staff.

Manning said INDOT can “manage” inflation’s effects on prices by virtue of the financial wiggle room built into its contracts.

“It hasn’t really affected our plans in the short term, largely because we build a contingency factor into our estimates and into our contracting mechanism,” he said. “We’re able to absorb some market pressures because of that.”

But if inflation persists, more definitive action will have to be taken, Manning said. INDOT “will need to refine its engineer estimates to ensure that we’re accurately forecasting project cost” in order to stay within budget.

The situation with residential construction is more nuanced. According to Steve Lains, CEO of the Builders Association of Greater Indianapolis, higher prices have indeed played a role in a slowdown of Indianapolis’ new-home market. But that slowdown is relative.

“For the first five months of this year, the [building] permits for new housing are down 14% in this marketplace,” Lains said. “But you have to realize that the market is coming off of a pace that was elevated 40% over where it was in pre-COVID times.”

In fact, the problem of too many buyers chasing too few properties, which began during the pandemic, continues apace. Inflation and higher interest rates have so far managed to cool the market only slightly, from “wildly overheated” to perhaps merely “overheated.”

For May, single-family permits were only 8% lower than in May 2021.

The market is “not crashing,” Lains said. “We have a long way to go from pre-COVID levels, which was a healthy market, and the overheated peak COVID market. That was almost unsustainable from a standpoint of material, land and labor availability.”

Demand for new houses, at whatever price, is still remarkably strong nationwide. During 2021 and the first months of 2022, low inventory and high demand pushed the national average price for a new home to $412,505—an increase of $50,000 from 2020.

While sales of new homes decreased 2.4% nationally this February, they actually increased 3% in Indiana.

According to the National Association of Home Builders Priced-Out Estimates for 2022, the median price for a new home in Indiana is $370,000. This would require a buyer with an income of at least $88,077. Only 789,096 of the state’s almost 2.6 million households qualify, with the rest effectively priced out of the new-home market. And a $371,000 house, only $1,000 more expensive, effectively prices out another 3,217 households.

“For builders, what it’s doing is diminishing the pool of potential buyers as prices increase,” Lains said. “The pool of buyers is getting smaller and smaller.”

Ironically, inflation’s dampening of the local market could be seen by some builders as a welcome respite—and a chance to catch up on their backlog.

Not that inflationary pressures aren’t a problem for them. Lumber, cement and shingle prices all continue to increase smartly, as do those for finished goods such as appliances and kitchen counters.

Lains predicted that, as inflation cools, prices for some commodity items might decrease—though perhaps not to their old levels. However, appliances and other interior accoutrements might hold on to the higher prices that became common during the COVID-inspired shortages—if for no other reason than that, for several years before the pandemic, prices remained more or less stable.

“When demand comes back, they’re probably going to hold their pricing because they arguably were underpriced before we moved into COVID,” Lains said.•

What Does A Business Analyst Do